It's Never the Price! 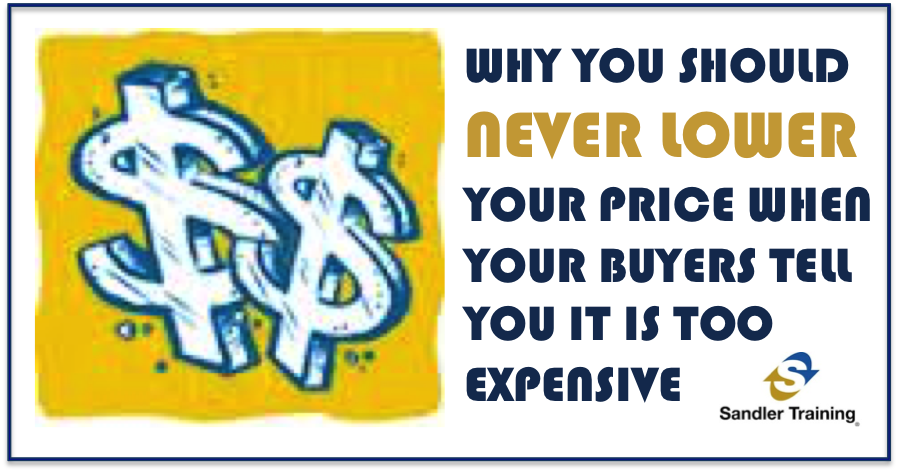 When you ask a salesperson to list the top reasons why prospects buy, they will say price. When you ask buyers the reasons why they buy, price is usually third or fourth on the list of criteria. Could there be something else going on in John's sales process that caused price to become the issue?

John had to break the news to his Sales VP that he had lost another deal. When asked why, he said it was because of price. John went on to tell him that to win business they had to undercut the competition. After all, "it was an extremely competitive environment". How many of you have heard this before? Sales people looking to discount price causing margin erosion and lowered revenues? If we really examine this situation, was price the real reason John was losing deals?

When John received the opportunity to "quote" on the new contract, he went into the meeting with the mindset that he had to be "low price" to win the deal. After all, he was an experienced pro and knew how competitive the market was. So when the prospect pushed for price, John caved and started talking price. As a result, price became the focal point of the conversation. Not the problems or issues that his company's solution could potentially solve for the prospect. In other words, he was not creating any value for the prospect and got into an apples to apples comparison. Unfortunately, it was the only the price apple being compared.

Instead of caving, if John had the skills to respond by saying something like, "I too would like to get to price, but price aside for a moment, why would you even want to switch suppliers?" Or, "let's assume we were competitive, why would you select us?" John would at least have a fighting to chance to start uncovering the real reasons and buyer motives to even considering making a change.

Furthermore, John didn't feel it was necessary to understand the criteria that other people involved in the decision-making process would use to select a new supplier. After all, why would that be necessary if he could just deliver the lowest price? Because John didn't have the skills and thus the mindset to try and create value.

Unwittingly, John continued to fall into the prospect's hands and effectively allowed the prospect to commoditize him and his company. As it turned out, on this particular deal, John was the lowest price, but the prospect told him he was going to stay with his current provider because he just didn't see the value in switching. So John, his company and Sales VP became the victims, not because of price, but because of a lack of an adequate sales process, skills and mindset to prevent this from happening.

Download this additional resource if you would like to improve your selling process and qualify more prospects.

Video: Sandler Rule #46: There Is No Such Thing as a Good Try

Sales Training and Golf: A Lesson in Repetition